St. Peter’s: A Name to Remember 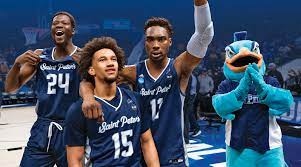 How is your March Madness bracket looking? If you are like almost everyone else, then it is not doing very well due to the numerous upsets. Some of these include No.11 Iowa State defeating No.3 Wisconsin, No.11 Michigan defeating No.3 Tennessee, No.8 UNC defeating No.1 Baylor, and No.12 Richmond defeating No.5 Iowa. However, some of the most buzz-worthy upsets have come from No.15 St. Peters from New Jersey. Not only was the University of Kentucky’s loss to St. Peter’s in the first round of the NCAA Tournament on Thursday was just the 10th time in tournament history that a No. 15 seed beat a No. 2 seed, but it was also the fifth-biggest upset in the tournament history from a point spread perspective. Along with this, the loss to Saint Peter’s is only the second time a Kentucky team has lost its opening game in an NCAA Tournament in the past 27 such games. If the ranking of the teams does not express enough how shocking this win was, it is important to note that the University of Kentucky’s basketball budget is $18.3 million, while St. Peter’s is $1.6 million. However, it is likely that their budget will increase in the following years due to their impressive run in the tournament.

After their first-round win, St. Peters continued to shock the world. In the second round of the tournament, they defeated No.7 Murray State with a score of 70-60. With this win, they were able to reach the school’s first-ever Sweet 16. With a fast-growing fan base and media exposure, the team headed to Philadelphia to play No.3 Purdue from the Big Ten conference. However, the Peacocks continued on their winning streak with a final score of 67-64. Although St. Peters was not favored to win, they pressured Purdue defensively and forced 15 turnovers. In a game and tournament as large as the NCAA, the number of errors made can be detrimental. After knocking off No. 2 Kentucky, No. 7 Murray State, and No. 3 Purdue, the team became the first No. 15 seed in NCAA Tournament history to reach the Elite 8. 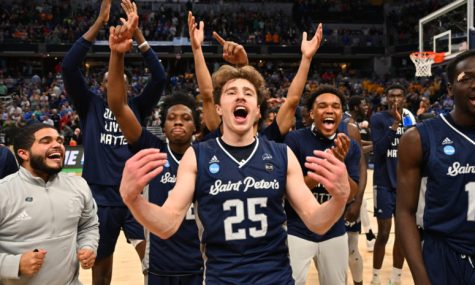 However, after their impressive sweep, the world’s-favorite St. Peters fell short when they faced unexpected visitor No.8 UNC in the sweet sixteen. UNC played arguably some of their best defense, while the Peacocks failed to hit their shots. The Peacocks shot 18 of 60 (30%) from the field and 4 of 16 (25%) from the 3-point range. They only committed 7 turnovers but lost the rebounding battle 45-29. Ultimately, the game ended with a score of 60-49 and many sad faces in the crowd.

Even though they lost, the small school from New Jersey was sure to make a name for themselves. With their coaching staff and drive, I hope to see them chasing the title again next year!