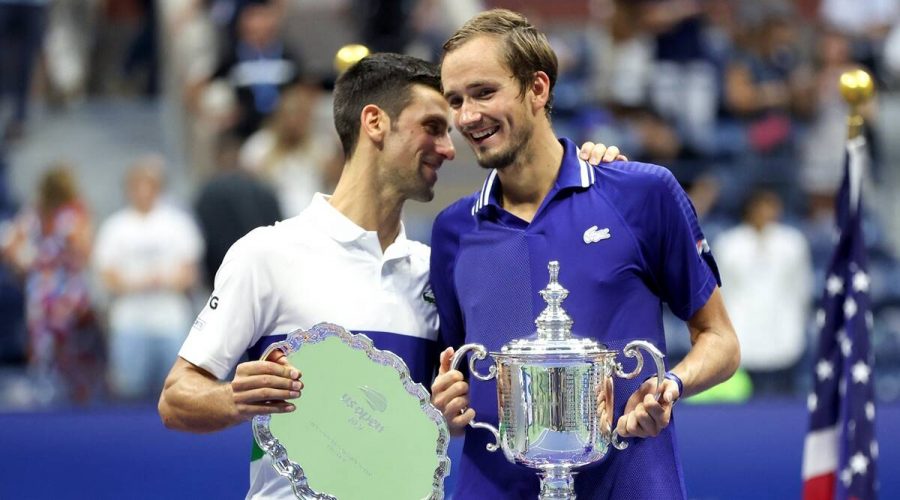 The Finals! This was a big weekend for tennis enthusiasts as the U.S. Open ended on Sunday, September 12. This annual tournament and final Grand Slam tournament of the year began Monday, August 30th in New York. If you have followed the tournament, then you would know it was missing some of the most well-known tennis pros this year. Stars such as Serena Williams, Venus Williams, Roger Federer, and Rafael Nadal all pulled from the event due to various injuries. Although these favorites were out, there were still some big names competing. Top competitors included Daniil Medvedev, Alexander Zverev, Leylah Fernandez, and Emma Raducanu.

One player in the center of the public eye for the tournament was Novak Djokovic. Djokovic not only played in hopes of winning a Grand Slam title, but also to win a Calendar Year Grand Slam. For reference, Grand Slam tournaments, also known as the majors, are the four most important annual tennis events. Such events are the Australian Open, the French Open, Wimbledon, and the U.S. Open. These tournaments offer the most ranking points, prize money, and public attention. By winning all four of these tournaments in a calendar year, a player is able to achieve a Calendar Year Grand Slam. Djokovic came close to achieving this in the year 2019, but his attempt was ended by his loss to Sam Querrey at Wimbledon. This year Djokovic’s chances were high, as he had already won the Australian Open, the French Open, and Wimbledon. However, he fell short as he lost in his final match to Daniil Medvedev.

Medvedev chose quite the event to claim his first major singles title, ending Djokovic’s 27-0 record in a year of grand slams. Medvedev stated to reporters, “It definitely makes it sweeter, for the confidence of my future career. I lost to him in Australia, he was going for history, and knowing that I managed to stop him definitely makes it sweeter and brings me confidence for what is to come.”

Shelton Honey, a member of the varsity tennis team at Rocky Mount Academy and an avid tennis fan, has been to the U.S. Open three times! However, she watched from home this year, stating “This year I’ve really enjoyed watching the U.S. Open, especially since history was made when 18 year old Emma Raducanu, who was a qualifier, won the women’s tournament. This made her the first qualifier to ever win a major. The men’s final was also surprising since history was expected to be made by Djokovic, but instead the young Medvedev pulled out the win in three sets.”

Although Djokovic was unable to pull off the greatest achievement of his career, 25-year-old Daniil Medvedev was able to prove his abilities in front of a crowd of fans, professionals, and celebrities. We look forward to seeing more from Medvedev and the other competitors!