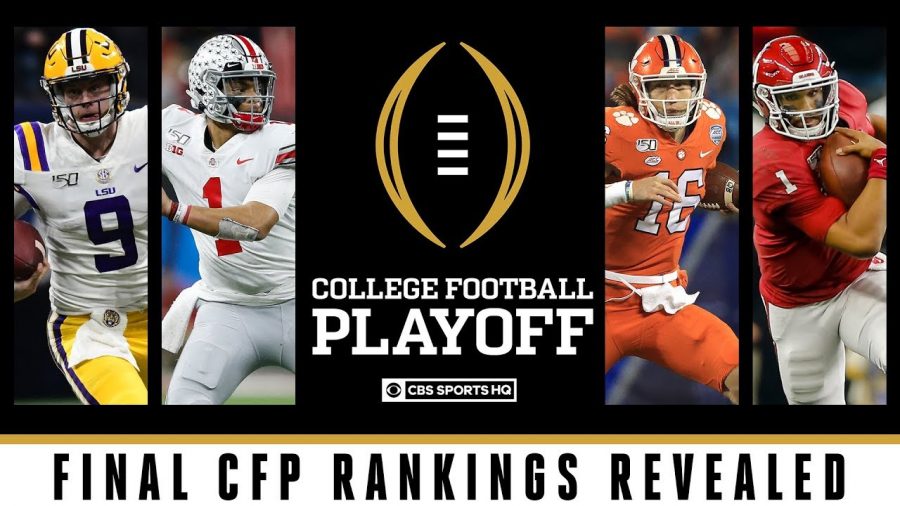 While many sports and other activities have been canceled due to the COVID-19 pandemic, the college football season, thankfully, was able to be played without having to be postponed or canceled. During this past season of college football, people were able to witness their teams compete for their conference titles and maybe even the National Championship. This year’s championship game attracted over 18 million viewers from across the country. While the viewership had dropped about 27% from last year’s shootout between LSU and Clemson, this year’s National Championship game did not disappoint.

The College Football Playoff Semi-Finals were played on New Year’s Day between the number one seed Alabama Crimson Tide and the number four seed Notre Dame Fighting Irish in the Rose Bowl, and the number two seed Clemson Tigers later faced off against the number three seed Ohio State Buckeyes in the Allstate Sugar Bowl. In the Rose Bowl, Alabama, led by junior quarterback Mac Jones and senior wide receiver Devonta Smith, did not waste any time and jumped out to a 14-0 lead in the first quarter. With momentum on their side, the Crimson Tide cruised to an easy 31-14 win over Ian Book and company. Later that night in the Sugar Bowl, Ohio State quarterback Justin Fields took the college football world by storm by knocking off number two seed Clemson. Fields had the game of his life, completing 22/28 of his passes and amounting for 427 total yards of offense and 6 passing touchdowns. On the flip side, Trevor Lawrence, the projected first overall pick in this year’s NFL Draft, was unable to get his team out of the 21 point deficit they had found themselves in at halftime. While Lawrence had 400 yards passing, he was unable to keep up with the Ohio State offense, which was firing on all cylinders. This set the stage for the biggest college football game of the year: Alabama vs. Ohio State.

Before the National Championship game was played, Alabama wide receiver Devonta Smith was presented with the Heisman Trophy, the highest honor in college football, making him the first wide receiver to win the award since Michigan’s Desmond Howard. Before winning the Heisman, Smith also was named the Associated Press College Football Player of the Year. Needless to say, Devona Smith is the top wide receiver prospect in this year’s draft and is expected to go in the first 5 picks.

On January 11, the time had come. The College Football National Championship was finally here. The game started off even with a tie game at the end of the first quarter. This didn’t last long, to say the least. Alabama’s offense was unable to be stopped and the Crimson Tide found themselves with a 35-17 lead over Ohio State at halftime. In the first half, one man on Alabama was responsible for more total yards of offense than Ohio State had gained in the first half. This man was no other than Devonta Smith, who accumulated 215 receiving yards on 12 catches and scored 3 touchdowns while he was at it. His 12 catches broke the record for most catches in a College Football Championship Title Game, while his 215 yards receiving was the second-most of all time in a College Football Championship Game. In addition to all of those accolades, his 3 receiving touchdowns tied the record for most in a College Football Championship game with Steve Smith’s record from 2005. After Smith hurt his finger in the third quarter, he did not play for the remainder of the game. However, Alabama did not need him as they cruised to a 52-24 win over Ohio State, winning coach Nick Saban his 7th National Championship ring. While 2020 was full of many uncertainties and unusual events, it gives everyone a sense of normalcy to see Alabama on top of the college football world, hoisting the National Championship trophy into the air.