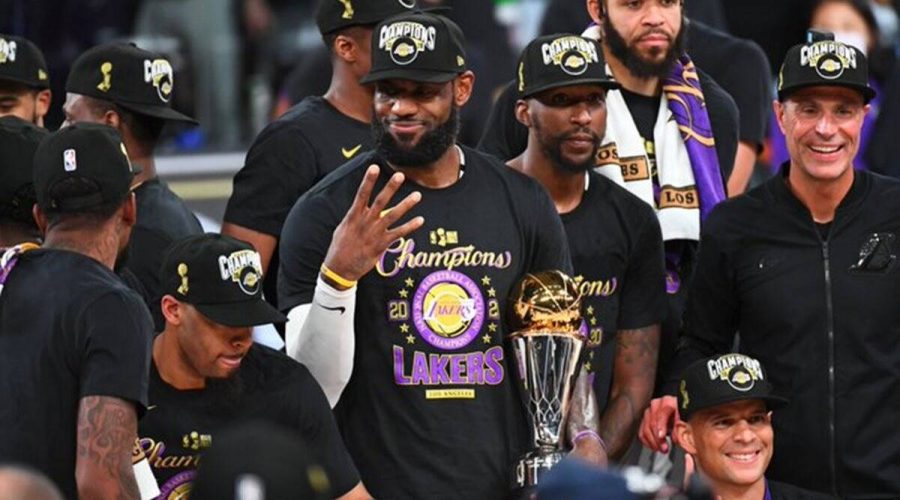 On Sunday, October 11, the Los Angeles Lakers made history, becoming the 2020 NBA Finals Champions. This win comes from within the NBA Bubble at Walt Disney World in Orlando, Florida, where 22 teams competed in seeding games to determine their spots in the Playoffs. From inside the bubble, many stars were born, including Devin Booker and T.J. Warren. The two biggest stories, however, were the Los Angeles Lakers and the Miami Heat. The Lakers, led by LeBron James and Anthony Davis, cemented themselves as a legendary duo for the Lakers. The Lakers started their journey in the playoffs by playing the Portland Trailblazers in the first round. The Blazers, led by Damian Lilliard, gave the Lakers all they had but were unable to compete with the speed and size of Los Angeles, losing the series 4-1. The Lakers then were faced by James Harden and the Houston Rockets. The Rockets took Game 1, but, like the Blazers, were unable to compete with the size of the Lakers, losing 4-1. Advancing to the Western Conference Finals, the Denver Nuggets were the only team standing in the way of the Los Angeles franchise’s 32nd Finals appearance. Like every other series, the Denver Nuggets lost the series 4 games to 1.

The stage was finally set. It was Heat vs. Lakers. LeBron vs. his old team. The series opened up with the Lakers cruising to an 18 point win over the Heat. During this game, Heat players Bam Adebayo and Goran Dragic were both injured. With the chances at a championship looking slim for the Heat, they lost the second game of the series 124-114. With Heat fans losing hope, they soon gained a second breath after the Heat won Game 3, behind Jimmy Butler’s 40 point performance. Not only did the Heat win game 4, but they also got news that their All-Star big man, Bam Adebayo, was listed as probable for Game 4. With this news came optimistic feelings about the chances for the Heat. However, the Lakers made it clear that it was their championship to lose in Game 4, winning 102-96. The Heat came back two nights later and left it all on the floor, winning Game 5 111-108. With the end in sight, LeBron James and Anthony Davis kicked it into second gear, securing the Larry O’Brien Trophy in Game 6 after a 106-93 win.

This was the Lakers’ 17th title, tying the Boston Celtics for most NBA Finals titles of all time. The Bill Russell NBA Finals MVP trophy was presented to none other than LeBron James, who averaged 29.8 points a game, 11.8 rebounds a game, and 8.5 assists a game in the Finals. The Lakers dedicated their win to honor the late Kobe Bryant, who won 5 championships with the Lakers in his 20-year tenure. With this win, LeBron improves his record in the Finals to 4-6 with 4 Finals MVPs. This year has been full of ups and downs, but seeing LeBron James in the NBA Finals gives everybody a sense of normalcy.