Halloween is just around the corner, and scary and creepy movies are on the rise for the season. One movie in particular that just came out has people surprised by its creepy and mystifying features: Joker. Ever since the announcement of the Joker movie, there was speculation about its concept and how this story would weave its way into previous films. But the director of Joker, Todd Phillips, said that this movie was going to be a standalone film. This raised many speculations and early critiques of the movie, especially from die-hard comic book fans. However, after just one week in theaters, everyone has either seen it or heard about it. But for those who haven’t seen it, this article will let you know what to expect from the movie and help you decide if it’s worth the money. 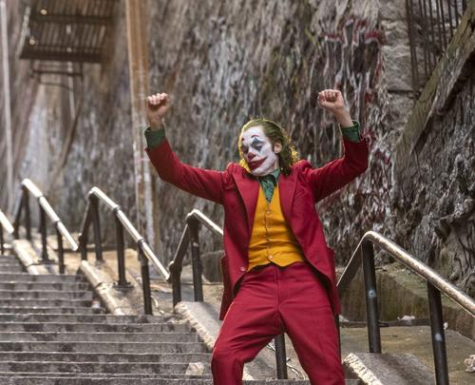 The story takes place in the fictional city of Gotham, where there is a huge depression going on when the movie begins. The main character, Arthur Fleck, is seen amidst the crisis and is suffering from the city-wide problem. Along with the depression, Arthur also suffers from mental health issues that cause his mind to float between what is real and imaginary. Throughout the film, you see that Arthur does have his own problems, but society and the madness of the world drag him down with every terrible thing that comes his way.

An important element of this movie is how it has nothing to do with the comics, aside from the characters. This could sound like a bad thing at first, but making the movie like this so that it doesn’t feel like a comic book story was a great way to create a character-driven plot. With a movie based on one character, there needs to be depth, and Joaquin Phoenix as the Joker does much more than that. Phoenix puts on an extremely stunning performance in this movie and leaves you wanting more. After seeing the movie, one would question if Phoenix himself is actually sane because of how real his character seems. This different approach on the Joker is a definite success. Since there is no clear good or bad guy, like in other stories, the conflict lies within the viewers themselves. Throughout the film you’re supposed to feel sympathy for the Joker, and that’s what causes you to feel chills run down your spine when Arthur Fleck finally becomes the iconic villain, Joker.